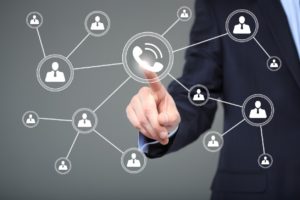 What to expect in VoIP technology in the coming year.

Voice over Internet Protocol, or VoIP, has become the clear standard for office phone systems. It costs less than old-style PSTN service and allows more features. The preferred way to go, especially for SMBs, is hosted PBX. It minimizes the need for on-premises hardware and lets people connect from anywhere. That much is now a solid base, so where are we going from here?

A big area of growth has been wireless phones on a VoIP system. There are three ways to do this: Wi-Fi connections, cell network connections, and DECT phones. The mobile VoIP market is expected to grow at 28% a year in the next few years.

DECT, Digital Enhanced Cordless Technology, is most familiar in the home market as cordless phones with landline base stations. The technology works just as well with VoIP base stations. The handset range can be as much as 100 meters, though interference and physical obstacles can reduce it. Unlike Wi-Fi, DECT is specifically designed for voice communication, so it gives a higher-quality experience. Wi-Fi is less expensive, though, and often is good enough.

With the 5G network and 10 Gbps speeds on the horizon, cell phone connections to hosted voice systems will get more bandwidth, improving the quality of video and conference calls. In addition, they’ll be able to handle data in new ways. The specification now exists, and the first networks should start to appear in 2018.

“Unified Communication” is a hot buzzword. It means the convergence of voice, video, and data. It’s easier for people to reach understanding when they see each other as well as hearing. There’s more value in business calls when people can see images, charts, and spreadsheets as they’re talking about them.

UC is developing in ways that deserve the adjective “unified” more than ever. In the past, combining data with phone calls has often been messy. In 2017 there’s been a strong trend to real integration of voice and data services, and this will continue in 2018 and beyond. Software vendors such as Salesforce and Microsoft provide broad application suites that can easily be integrated with VoIP.

Having a hosted PBX doesn’t just make calls to phone numbers cheaper. It often eliminates the need to call a phone number at all. Internet-only connections allow the full range of VoIP features, including ones that aren’t available on a voice-only line. Remote offices and business partners can connect to the same PBX as the main office and get high-bandwidth phone connections with access to video, conferencing, and integrated data.

One of the less fortunate signs that a technology is successful is that crooks go after it. Security for VoIP systems has become an important issue. If the voice network isn’t well secured, it’s potentially a gateway for intruders to get into a business’s private data and customer records. Isolating the voice network from the data network reduces the risk. A hosted PBX generally provides better security than an on-premises exchange.

VoIP phones are computing devices, and as such they’re vulnerable to malware. Keeping their firmware updated regularly is important.

Security measures that aren’t designed with voice communication in mind can interfere with quality of service. The near future will see growth in VoIP-friendly security software and hardware.

Planning for the future

Internet telephone systems are evolving rapidly, but that’s not a reason to hold back. SIP has become the dominant standard for phones on the network, and phones built on it won’t become obsolete soon. Features and options will expand, but a hosted PBX provides the flexibility and scalability to adapt without spending a lot. VoIP phone systems are today’s reality for business, and they’ll only get better.

Are you looking for a scalable, robust hosted PBX for your business? Talk to us.