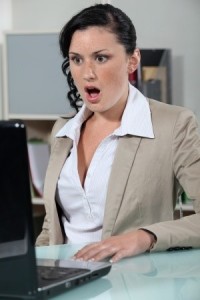 You know that sinking feeling when you’ve done irreversible damage to your computer, or your career, with one simple click?

The day is sailing along just fine. You’ve been super productive and the office is in good cheer before the holiday weekend. It’s almost time to call it a day, you just have to close out the last few things you were researching on your computer. Quickly you start clicking through closing all the windows when a random pop up appears. You hit the no button, of course you don’t want to buy any weird super accelerated diet pills. That’s when it happens. Your screen flashes, everything goes black. It’s the beginning of the end. Here are 3 things not to do on your computer from people who learned the hard way.

1. Hitting a Button on a Pop-Up- Similar to the story above, one business executive was hurrying along, no doubt on his way to an important meeting when he was met with an ominous message on his screen. The warning claimed that illegal child pornography had been found on his computer. The message appeared to be from the FBI, but it conveniently allowed him the option of paying a fine to avoid federal prosecution. The man being in a prominent position, feared a child pornography investigation would ruin his reputation, paid the fine. Unfortunately, the message was not from the FBI, it was a form of spam known as ransom ware. It downloads onto your computer after clicking a link on a phishing email or pop-up window. Days later, the malware appears, freezing the computer screen, and displaying the pornography warning. Never click a link or any button on a pop-up window. To safely close a pop-up window, locate the button or tab in your task bar that corresponds to the pop-up. Right click on the button and select close. Furthermore, remember if the FBI is going to arrest you, they won’t use a pop-up on a computer to communicate.

2. Not Double Checking Who You Are Sending That Email To – Just ask the wonderful folks at the admissions office at UC San Diego what happens when you don’t check that email address one last time before sending. 46,000 applicants received a welcome email stating that the university was thrilled they’d been admitted and couldn’t wait to see them. A nice sentiment for the students. The problem is someone sent it to all applicants instead of all admitted students. That meant 28,000 rejected prospects got a little reminder that they were not accepted. The entire admissions staff was required to field the thousands of calls from naturally upset email recipients and inform them that no, the decision hadn’t changed. They were still not welcome.

3. Spill Coffee on Your Laptop – Every morning Sally is the first one at work. She grabs her cup of coffee and starts reading emails preparing for the day. One morning she had just sat down, coffee in hand, when a big booming voice scared her to death. As Bill laughed and announced proudly how he had made it into the office early. He had a big project to work on. Sally jumped straight into the air and watched helplessly as the coffee flew nearly to the ceiling and then directly down on your laptop keyboard. She wiped up what she could and everything seemed to be fine until about 15 minutes when the whole computer crashed and refused to power up at all. If you spill liquid on your laptop, immediately shut it down. Unplug it and seek help.

For more tips on keeping your computer in good working order, contact us. Our experienced and helpful staff can work with your to make sure your data is protected and is always available in emergency situations.