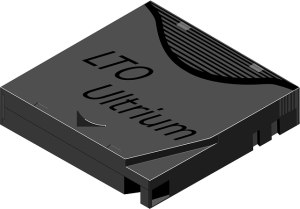 Tapes are probably something you haven’t heard about in a while, unless you’re referring to them in the past tense. It may surprise you to realize some businesses continue to use tapes in various capacities to protect data and it sounds antiquated, but is there something more to this than meets the eye?

Why are Tapes Still in Existence?

In answer to the question proposed in the introduction, that’s a no. Tapes are old and inferior to current backup methods. You have disks and cloud storage, to name just two options available to you. There are no situations where tapes are better.

The reason people still use them is history. They were once the king of the backup. People generally don’t like to change unless they’re forced to. As long as tapes exist, people will continue to use them because they’re familiar with them.

You’re damaging your security by doing this though. Here are some of the reasons why you should be moving away from tapes.

A tape will never hold as much as a disk. With computers being able to hold more data than ever, carrying big files is no sweat. It will be a problem when you attempt to store these important files on a tape. They can’t hold as much data, which means you’ll need to buy more of them or you will need to span several tapes to create a backup set.

Not only does this increase your storage costs, it’s also an organizational issue. You try making a corporation run their backups off of disks. You would have to implement a complex organizational structure to make sure you can access the correct data when you need it.

Tapes are notoriously unreliable. They were always problematic back when they were the prime storage method of choice and nothing has changed today. The slightest jolt can damage the internals and cause it to corrupt data. As a business, you can’t afford for this to happen.

In some industries, losing important data can leave you open to legal action. Is this what you want?

No Difference in Ease of Use

What stands out most of all is the fact tapes are no easier to use than disks. Modern technology is so often more difficult to use than what came before, but this isn’t the case with disks and cloud storage. Anyone can use them, plus in many cases it’s easier and more convenient to store something online than on a tape.

Unless you’re already familiar with tapes, it would be harder to introduce someone to tapes than to simply upgrade.

You can store more data, save money, and become more efficient by storing your essential files on a modern storage device. Tapes have no advantages and are inferior in every single way. Don’t let your natural resistance to change damage your business security. Invest in a modern backup system today and let the tape become a relic of the past!

One thought on “Tape-based Backup is Dead”