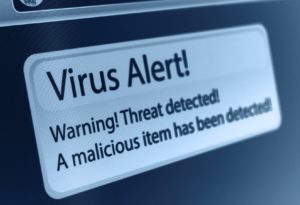 Suspicious or unwanted pop-ups could be a sign your computer has been infected with malware.

Whether you own a personal computer, or have an entire network at your disposal, it’s always important to be knowledgeable about malware. Aside from infecting your computer in numerous ways, malware is also found where you’d least expect it to be. For example, there are many websites out there which seem safe at first glance, but upon visiting them, your computer may become vulnerable to malicious software and other dangerous programs. As another example, you may even receive an email from what appears to be a coworker, only to find out it’s completely unsafe when you open it. With that said, what are some ways in which you can tell your computer’s infected with malware?

While just about any website will have advertisements, one sign that your computer is infected, is if you notice the same ads on every website visited, especially if they happen to be suggestive or explicit. For example, let’s say that you’re on a website for your business, and the advertisements are for estrogen pills. When visiting other sites, you also notice these same ads constantly showing up. It’s not often for websites to display the same advertisements, so this could be a case that your computer has become infected.

One of the most common signs that your computer is infected with malware, is if you keep receiving frequent pop-ups. This doesn’t just happen from visiting unsafe websites, either, but many downloadable files are often bundled with adware and other hidden programs, which are often the cause of this issue. Because there are many who don’t read the terms of service before downloading files or programs, they might not be aware of what’s really being downloaded. However, there are plenty of downloadable programs where you wouldn’t suspect they’re unsafe, even through careful observation. Always be cautious when installing files and/or programs on your computer.

As was briefly mentioned earlier, a sign your computer may be infected with malware, is if you happen to receive suspicious emails, especially from your coworkers. In the emails, are they requesting important information from you, and does the tone of their message seem off? If you’re not sure whether the message was from them, always confirm before taking any action, and block the email address in question. While suspicious emails may not always be a sign that your computer is infected, it could be an indication that someone wants your device to become susceptible to malware, which will be the case if you open the suspicious email.

#4. Slowdown on Your Computer

While many businesses are more than aware of how dangerous malware is, knowing whether your computer’s infected or not, is just as important. Between repeated advertisements on various websites, numerous pop-ups through downloadable programs, as well as receiving suspicious emails from what appear to be your coworkers, there are plenty of ways to tell that your computer is infected. For more information, contact us today at SystemsNet.

One thought on “Signs Your Computer Is Infected With Malware”