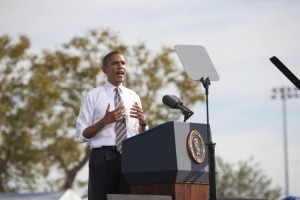 President Obama recently spoke at Stanford University, underscoring the importance of cyber security, and called upon industry leaders to fight back against hacker attacks and growing cyber crimes

President Obama hosted a White House Summit on Cyber-Security and Consumer Protection at Stanford University Friday, February 13th. With what seems like a new hacker attack on the US everyday to our a major corporations, or security breaches where millions of people’s records are being compromised, the tech-industry as a whole is taking action. Within the past few months companies like Sony, and America’s second largest healthcare company, Anthem, have experienced massive cyber-security breaches. The president is fighting back against the constant stream of cyber crimes and threats by meeting with industry leaders in the heart of the nation’s tech community, the Silicon Valley, to call on private and public sector businesses to begin information and intelligence sharing.

Obama hopes to reach some common ground, and a solution that will keep our civil liberties intact while providing a higher level of cyber-security. However, some critics are fearful that giving the government too much control will stifle innovation and growth in the industry. The CEO of Apple, Tom Cook, and Dan Schulman, CEO of PayPal, were amongst the industry leaders in attendance at the meeting. The speakers at the Summit called for new information sharing policies across the private and public sectors of our economy, and believe that without sharing intelligence we won’t stand a chance against cyber-crimes. They also wanted to bring more attention to the foundations of cyber-security that will help protect the US all across the board: from keeping anti-virus software downloaded and current, avoiding suspicious emails, backing up data, to password technology.

Encryption was also a key topic of discussion as it is one of our most important cyber-security tools. “We can’t allow the short-sighted worries of some law enforcement officials to undermine the longer term goal of creating a truly secure Internet, which in itself will help prevent countless crimes,” Danielle Kehl, policy analyst for the New America Foundation’s Open Technology US News. Encryption is key for a secure internet, and for allowing things like mobile banking, and the transferring of classified information between government agencies and the military.

KCRA News reported that the President would be signing an executive order hoping to achieve that common ground that will get the private and public sectors to work together on these issues. They feel this is a matter of our public security and health, as attacks coming from inside and outside of our borders are compromising our financial grid, healthcare systems, and power grids daily.